Why am I feeling like this?’ Dazed and bloodied Anthony Joshua’s worrying words to his trainer shortly during his shock defeat to Andy Ruiz Jr 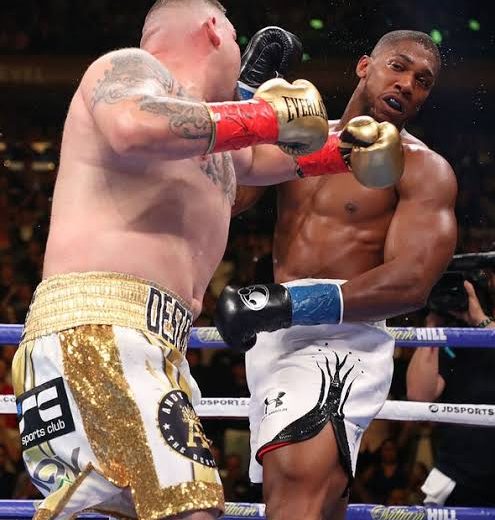 The Mexican – who only took on the fight with six weeks’ notice – achieved one of the greatest upsets ever seen in boxing to take Joshua’s WBA, WBO and IBF belts with a seventh round stoppage.

Joshua had clearly been rattled after Ruiz sent him to the canvas twice in the third round as the chances of an almighty shock increased.

And it was apparent by the end of the fifth round that Joshua was in deep trouble as he asked trainer Rob McCracken: ‘What round is it?’

By the end of the sixth, Joshua was struggling with a bloodied nose and asked his team: ‘Why am I feeling like this?’

The exchange was picked up by the ringside microphones and broadcast on worldwide television coverage.

With the British champion reeling, the end came in the seventh when Ruiz dropped Joshua twice more and the referee brought the fight to a close.

The worrying words from Joshua, which foreshadowed the seventh-round stoppage, didn’t go unnoticed.

Former British heavyweight champion Frank Bruno wrote on Twitter: ‘Not sure if it’s just me but @anthonyfjoshua said in one of the rounds ‘why am I feeling like this?’ He didn’t seem right from the start. I wonder if there’s more to this?’

Former footballer Frank Sinclair tweeted: ‘AJ’s questions to Rob after rounds 5 and 6. What’s he going to come out and do? Why am I feeling like this though?

‘What shot will catch him? What shot caught him? For me that’s a mental block, poor preparation. Got caught up in this US dream. No fear factor, to mentally defeated.’

10 Rules that made me a millionaire at 28